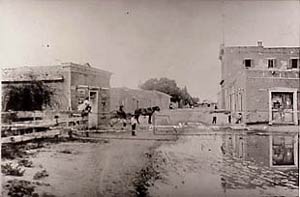 The Wild West can still be felt here in the high desert. So can that beautiful Spanish Influence. They bring a uniqueness in feel, a deep physical history older than the Eastern United States, and a taste of culinary delight that is purely New Mexican in every way.

Albuquerque and its surrounding areas has seen the rise of  the great Pueblo people. Spanish Missionaries and Conquistadors such as Francisco Vázquez de Coronado which came through on his attempt to discover Cibola and the Seven Cities of Gold; it was also part of an occupation. It has seen the likes of Kit Carson, Wyatt Earp, Doc Holliday, and William H. Bonney -Popularly knows as Billy the Kid-.

There have been fist fighting rivals to decide who would become Bernalillo County Sheriff. A city marshal who hanged for murder. An occupation by the Confederates during the Civil War and the Battle of Albuquerque which was fought during their retreat to Texas.

Passing through the heart of New Mexico and straight through Albuquerque is The El Camino Real. An official trade route for nearly three hundred years from 1598 to 1882, it stretches from San Juan Pueblo, New Mexico, South 1,600 miles to Mexico City.

I have joined CityPals to give tours focused around Old Town, Los Ranchos, Albuquerque, Etc. I can specifically focus on the players and locations of the city circa 1880. Shoot outs, hangings, lawmen, outlaws, scandals of politics, and love triangles. The Wild West experience if you will. Have you ever shot a revolver? Or any gun for that matter? Well, that can be arranged too!

However, I will also provide guided tours of the sites you would prefer to see. Be they historical or not. I can show you places for some great New Mexican food, desert drive day trips to Santa Fe and the its Plaza (where you may spot some celebrities), the Very Large Array, Four Corners Monument,  Lincoln, Petroglyphs, and many other places you can choose from.

Check out my profile on CityPals if you wish to book a future tour.

I shall keep you posted on the inner-workings and progress of said tours.