Before the Sun even breaks the horizon to the East, in the crisp biting cold of the high desert morning, a substantially tall, thin, pale, and mustached man in shackles steps onto a rail-coach in Santa Fe, New Mexico. His destination is a mentally arduous, nearly three and a half hour trip South to Albuquerque, yet that is not his final destination. That is to be reserved for 3:00 PM this afternoon, when he will be sent -quite literally- up into the air, the final act of which shall be performed by his friend.

He had been a saloon owner, briefly served in Company B of the Texas Frontier Battalion, ran a variety theater, possibly a couple of whorehouses, and his last employ was by the city of Albuquerque as the city’s first marshal. A job that would be in part the reason for his fate on this cold Winter’s day.

Arriving in Albuquerque just before 10 AM, he is transferred to the custody of the Albuquerque Guards lead by Perfecto Armijo, sheriff of Bernalillo County but more importantly, and perhaps most unfortunate, his friend. He is then taken another two miles to the County Jail located in Old Town, Albuquerque residing just outside the Southeast corner of the Plaza. There he is to wait the next few hours, contemplating his life and mortality.

He is visited by Chas Hall, a reporter for the Las Vegas Daily Gazette, of whom he has built a rapport. He is gifted with a new suit, one suitable to be sent to his maker in the Heavens above. Also present is Father S.J. Personne who was summoned from San Felipe de Neri Church which stands conveniently perhaps less than two hundred yards away. Father Personne is there to grant his request to be baptized into the Catholic faith.

One friend in particular, Elwood Maden, would spend enough time with him that he is actually able to tell a little of his true story. Something he kept secret for what ever reason for several years. Maden learns his true name and that he originates from Walnut Ridge, Arkansas. He recounts to Maden a story of a heated land dispute between his family and others and that he suddenly had to leave home. Of the time he went by the name John Johnson for a brief period whilst living in Decatur, Texas shortly after serving with the Rangers. He admits to a couple of shootouts but holds steadfast that despite his reputation he had never killed anyone until he was the marshal of Albuquerque.

Twice he killed in Albuquerque and only months apart. Both times while wearing a badge, in the line of duty. The second time, however, the courts found he was not acting under any legal jurisdiction and that it was cold blooded murder. Others say he is being hung this day for the earlier killing of Harry Brown, and not the one he was actually convicted of. Why? Because of the fact that Brown was a man hailing from a prominent political family of Tennessee.  However, regardless of which death is considered by the people to be the underlying reason for this day’s event,  perhaps it is also because he is to be an example to the people of the New Mexico Territory. There has been too much violence and death. With the very recent memories of the Lincoln County War and the hunt for Billy the Kid, they will no longer put up with such wanton killing…-be they guilty or not?-

Friends have stuck by him, most importantly sheriff Armijo for one, and there has been much heated debate about his guilt or innocence. However, his appeal to the Supreme Court of the New Mexico Territory held that the lower court came to the correct conclusion. He was guilty of killing Charles Campbell! But what of the substantial conflict of interest sitting on the very bench of that court? Although this was not the only conflict of interest in regards to this whole…affair.

What was going through his mind the last couple of hours I cannot say. What would you be thinking about as you watch the clock slowly tick, every movement of the hand showing you what little time you have left.

Sheriff Armijo brought him out a little more than a quarter of an hour before 3:00. He spoke at length to his innocence. He kept speaking as though if he didn’t stop his fate would not play out as it had been so ordered. His head being covered with a black hood he asked his friend, sheriff Armijo, how much time he had. It had come, he was told. Muffled from under the black hood you could hear him proclaim “Gentlemen, you are hanging an innocent man”. Armijo’s watch snapped closed, it was the signal. The rope was cut and he flew upward to the sky with such a force his head hit the cross beam with a thud and a crack!. It took some time but he was finally pronounced dead.

Thus came the end of our city marshal, the end of the man known during his last years of life as Milton J. Yarberry.

With your help, you can make this book a reality           https://www.patreon.com/Mavrikakis
The Marshal Hanged in Albuquerque: The Life, Rumors, and Facts of Milton J. Yarberry 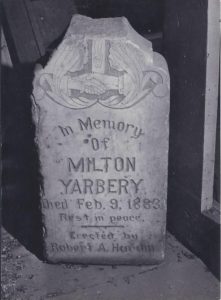 Yarberry headstone after being removed from the Santa Barbara Cemetery. Photo taken by Andy Gregg (1966) courtesy of the Albuquerque Police Department Museum.