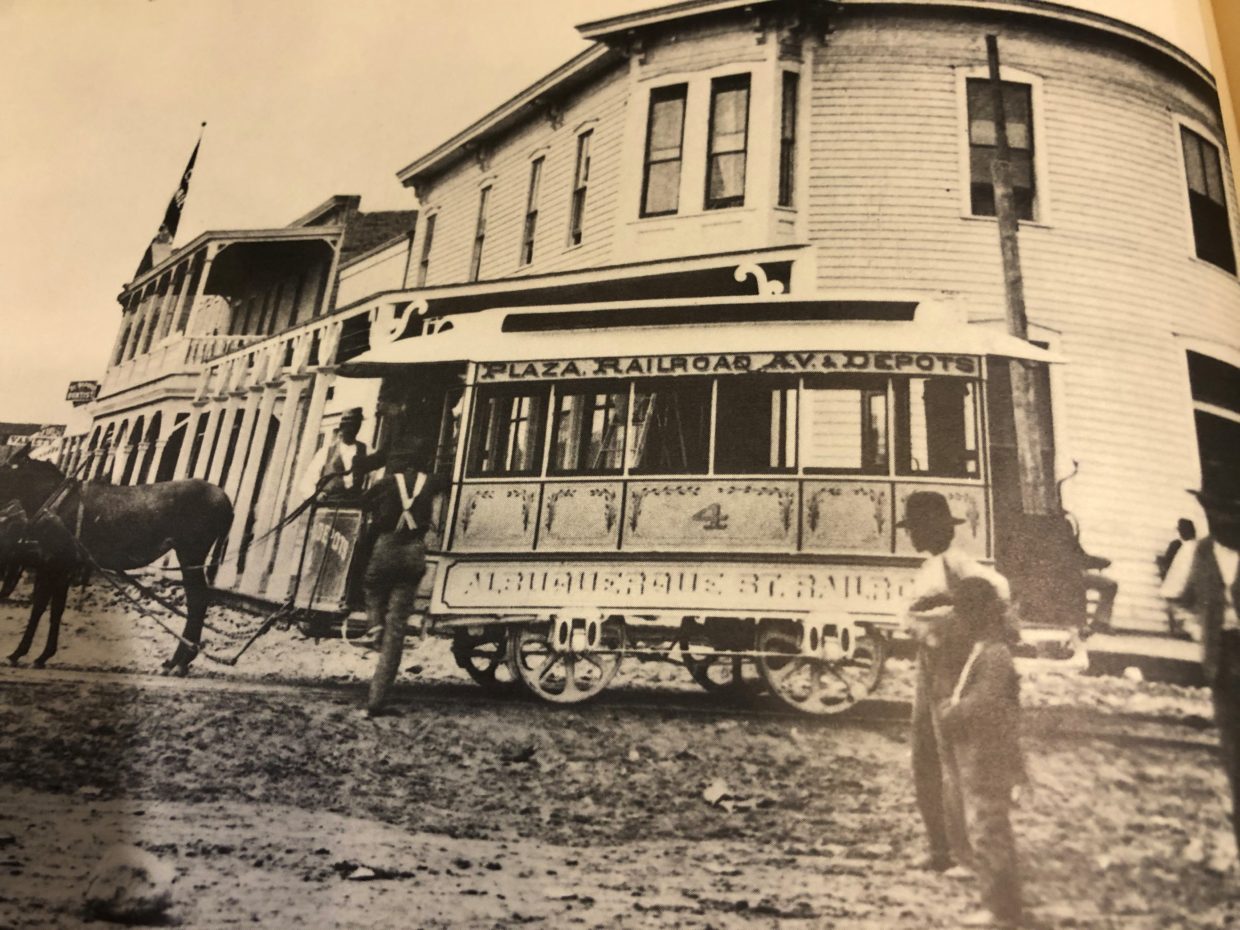 All, or part, of this content in some form will appear in my book, The Marshal Hanged in Albuquerque: The Life, Rumors, and Facts of Milton J. Yarberry

Today, February 9, 2018 marks the passage of one hundred and thirty-five years since the weight dropped and Milton Yarberry was pulled to the sky, thus leaving this Earth for eternity.

In an era where 1st degree murder seemed to have a much broader meaning, men were executed all too often. By modern standards, would they have been more likely to be charged with 2nd or 3rd degree murder? Or, perhaps only manslaughter? Many may have been spared capital punishment. Some, in fact, would have been released after a stint in jail.

I’m not saying this is the case, but, Milton Yarberry may have been one of these men to have been spared and eventually freed. However, politics, the definition of 1st degree murder, a questionable Territory Supreme Court, and other factors most likely played into Milton losing his life in Old Town Albuquerque, one hundred and thirty-five years ago.

A product of his time, he may have played both sides of the law. Unsubstanuated reports have him being responsible for the deaths of a few men outside of the two we know for a fact he had killed while serving as constable of Precinct 12 in 1881.

The story is familiar to many. First was the shooting of Harry Brown on March 27 of that year.

The altercation between the two men is riddled with controversy and contradictory reports. All that is known for certain is that Yarberry approached Brown at Gerard’s Restaurant (now the northeast corner of second and Central Ave), where Harry was overheard saying he wanted to talk. They walked around the corner (or into an alley). Harry was then overheard telling Yarberry he wouldn’t be afraid of him “…if you were marshal of the United States.”.

As the two were face-to-face, Sadie Preston appeared from around the corner, at Milton’s back, where she is said to have called out to Brown. Moments later Brown was dead. Shot by Constable Yarberry. A hack driver, named John Clark, said he saw Milton shoot Brown twice in the chest and again two more times once he was on the ground.

“I did not look around, (at the calling out by Preston to Brown), and a moment later Brown struck me a blow in the face with his left hand. At the same time drawing his six-shooter with his right, and immediately firing his first shot, grazing my right hand and inflicting a trifling scratch on my thumb. In an instant I realized I must kill him or die, and quicker than it takes to tell, I whipped out my gun and began firing.” ~Milton Yarberry

It was known Brown had a problem with Yarberry and was reported to say on several occasions he would kill Milton. Brown was a drunk and a braggart, exaggerating his involvement in stopping a train robbery and his proficiency as a gunman.

No gun was reported found. One account had Sadie Preston removing brown’s gun from the scene. But, I have been unable to track down the source of that story.

Milton was tried twice for the death of Brown. The first being a preliminary hearing. The second one following an indictment by a grand jury. Acquitted both times, this didn’t sit well with some prominent citizens and a few newspapers of the new city and the Territory. Nor, especially with the Browns of Tennessee.

Henry “Harry” A. Brown is not to be confused with Henry N. Brown. Both were contemporaries in New Mexico circa 1880. Henry Newton Brown was a participant in the Lincoln County War and a member of the Regulators. He was among the group who ambushed and killed Sheriff William Brady, eventually making his way to Kansas where he briefly became a lawman.

Harry, or Henry A. Brown, was the product of a well off and prominent political family. His Uncle served as Governor of the state from October 10, 1871 to January 18, 1875. His Father, Neil S. Brown, had a longer political career. He served as Governor from October 17, 1847 to October 16, 1849. He then served as Minister to Russia for President Zachary Taylor (and Fillmore after Taylor’s death) from May 2, 1850 to June 23, 1853. Finally serving as Speaker of the Tennessee House of Representatives from 1855 to ’57.

A month after his acquittal, Milton shot and killed his second man, Charles Campbell. This happened on the evening of June 18, 1881.

The night before, on June 17th, Milton and Sheriff Armijo had taken part in the manhunt for the Allison gang (Charles, not Clay). They had conferred with Frank A. Hyatt who was deputy sheriff of Conejos County, Colorado, and had been tracking them the whole way.  First thing they did was post guards at the bridge crossing the Rio Grande, then scouting the road north out of Albuquerque.

What happened next, you ask? I don’t know! I do know that the Allison Gang was captured that evening, but not the specifics. This came from a newspaper story by Howard Bryan in 1961, sourced from contemporary accounts in 1881. I have yet to track down the second part of the article. Bryan was an excellent chronicler and story teller of Albuquerque’s history. He is greatly missed.

I am unsure of the Milton’s involvement after this point in the manhunt. I do wonder, however, if it may have played some part in what happened the following even during the encounter with Campbell. Was he still pumped with adrenalin and excitement from the manhunt?

Back to the evening of the 18th. Here we find Milton and Frank Boyd in front of, or near, the Maden House. Perhaps discussing the events of the previous evening? This place is often confused by people writing about Milton. It is often stated as the home of Elwood Maden, but they are mistaken. It was a hotel (where Hyatt stayed while in Albuquerque), perhaps also containing a saloon or even a restaurant . Milton calls it a saloon at least once:

“On the 18th of June 1881, I was an officer in New Albuquerque under Sheriff Perfecto Armijo. The evening of the above date, I was standing between Zeiger’s and Maden’s saloon, when I heard some shots fired on Front street. I did not start immediately but waited until certain citizens complained about the trouble. Then I started down the street in company with seven or eight other persons. Boyd was with me. ‘ The man who had done the shooting was standing in front of Lewis’ store. He was pointed out to me. Campbell went away as soon as he noticed me. I got within seven or eight steps of him when I said:
“Stop, I want you.”

Just like four months prior, moments later a man was dead. This was the event that would come to be the cause of Milton swinging at the end of a rope nineteen and a half months later.

I will not go into the specifics of this event at the time, that would be more appropriate for the anniversary coming up in June.

As mentioned in the first few paragraphs, many things could have contributed to his execution. Yes, he shot Charles D. Campbell. That is not in question. Yes, he did kill Harry Brown. That too is not in question. What is, however, is whether Milton hanged for political reasons, by making him an example, and for “getting away with” the death of Brown? Were his hearings fair? More specifically, was his appeal? That too will be discussed at a later date.

Many people supported Milton and claimed it was in fact the killing of Brown that he was being hanged for and not for the killing of Campbell. The most important of which being Sheriff Perfecto Armijo. He said this was the case at the time, and for many years after. How much influence, if any, did the Brown family play?

I have made no conclusions yet. But I will say that my thoughts and opinions on Milton J. Yarberry have changed over the last two and a half years of researching for my book. I am having some doubts as to his coldblooded ways. Doubts as to all the other men he had supposedly killed earlier in his life. Doubts as to his guilt in the first-degree murder of Campbell. Still, I am not swayed either way. I have more research to do and cannot officially conclude anything until I have exhausted all avenues and leads I can find.

Now. Let’s discuss briefly the picture attached to this piece…

I’m not positive, but this corner building may in fact be the very place that Milton Yarberry and Frank Boyd were standing in front of or near when they heard the shot fired from the Greenleaf(?). This photo is from July 1881, just a few weeks after that fateful night.

If correct, this would be the Maden House mentioned earlier. It was owned by Elwood Maden and possibly his brother Hiram Maden. By 1885 it was known as Hope’s European Hotel.

I am looking into it. Hopefully I can confirm, or eliminate, it as Maden’s sooner rather than later.

One more thing, that street car in the photo? Just imagine. There’s a small chance that it could be the very same one which took Milton to Old Town on February 9th, 1883, mere minutes after arriving by train from Santa Fe at about 10:30 in the morning…

Four and a half hours later, Milton was dead.