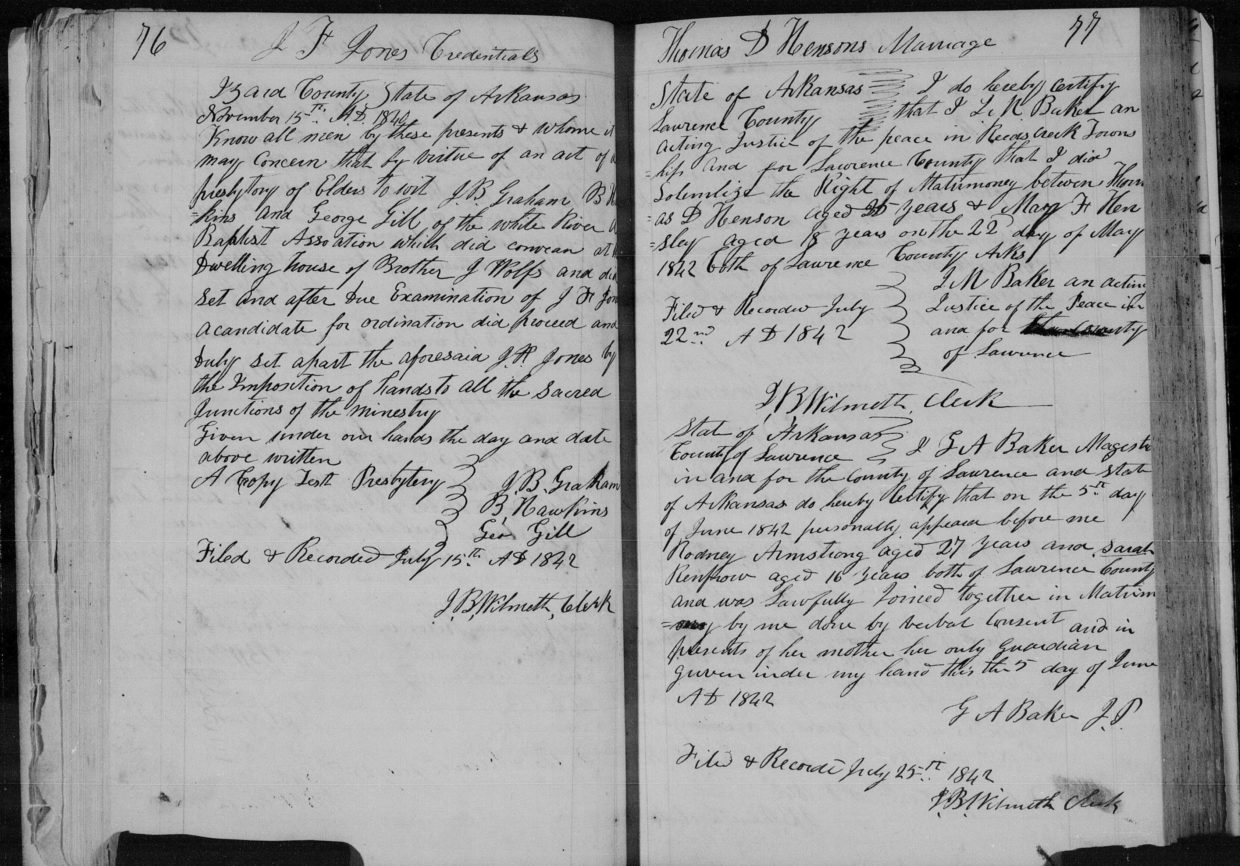 All, or part, of this content in some form will appear in my book (which is nowhere close to being finished), The Marshal Hanged in Albuquerque: The Life, Rumors, and Facts of Milton J. Yarberry

One big problem in researching Milton Yarberry, beyond the fact there is little to go on and that this is my first foray into researching and writing a biography, is when do I choose to believe him, and when do I not? What do I do with the contradictions?

Not only that, but it is difficult when your predecessors who wrote of him, of which you are using their work in your research, tell the same few accounts but none (or very few) can be substantiated? The same stories merely repeated over and over. With nothing to back up such tales. Stories, or a great narrative, while fun, are not facts. No matter how many times they are repeated.

Now, let me preface the rest of this by saying everything I am doing regarding Milton’s biography, as to his true identity, is by following the John Armstrong lead.

I must admit that there are a few things with that lead which do trouble me at this time. Yet, I do have enough circumstantial evidence to keep from abandoning this, the best lead we have. Enough pieces do fit into this narrative, coinciding with what has been reported.

We’re not blessed with an overabundance of historical record when it comes to Milton telling his own story, or saying anything for that matter. His personal narrative-his voice- has been virtually silent. So far only those interviews before his death are all I have been able to scrape up. However, I am relentlessly digging all the time.

One example of a personal contradiction also happens to be a rather important historical one. I present to you Walnut Ridge, Arkansas.

Walnut Ridge is the name of a town you will see in every piece written on Milton. Every. One. This is where he was born. This is told as fact by everyone (and him)

At first during these interviews Milton refused to discuss where he was from.

“After he got a little calmer, he [Yarberry] was asked if he would not give the reporter a slight outline of his life. This he consented to do if the place where he was born would be kept secret.” Las Vegas Gazette, Chas C. Hall, reporter

Milton then goes on to say;

“my reason for asking this is that I have a mother and two sisters living, and I do not wish them to know about my disgraceful death.”

However, the next day (February 9th, 1883) while on the train to Albuquerque from Santa Fe, the Gazette states:

“…representatives of the Las Vegas Gazette, Las Vegas Optic, Santa Fe New Mexican, and the Chicago Inter-Ocean and Tribune. The reporters availed themselves freely of this opportunity to talk with the prisoner. Yarberry said he did not object to publishing where he was born, which was at Walnut Hill, Randolph county, Arkansas.”

Suddenly Milton is willing to talk about where he’s from. Perhaps we should not begrudge him on his inconsistency as to what he tells Chas C. Hall in his final interviews and what he later says on the train. He was, after all, literally preparing himself for a face-to-face meeting with Thanatos. His emotions and mental state must have been rapidly changing those last few days. Somethings he thought important not to discuss one moment, well, they may not appear so important the next.

Returning to his statement, we will concede Walnut Hill as being Walnut Ridge. Whether this is a mistake by C. Hall in reporting the name or what Milton said is unknown. I am still tracking down other reports. Perhaps he purposely misnamed where he was from yet still giving a clue to it by using a nearly identical version? Who knows?

Walnut Ridge was not a town when he was born. It did not exist. There was the Old Walnut Ridge but that was not occupied permanently by settlers until 1860, eleven years after his birth (1849). The current Walnut Ridge, a few miles away, was established officially by a former Confederate Colonel named Willis Miles Ponder in 1875. This makes it quite difficult to put Walnut Ridge as his place of birth.

It is possible his family had settled the area earlier but there is no known evidence to support this. It is also possible that his relatives were currently living there when he made the statement which is why he mentioned the town, but again, there’s nothing to support it.

These are about thirty miles northwest from Walnut Ridge, and though these townships are no longer part of Lawrence County, this does put him in the correct County at birth in which Walnut Ridge lies.

The Armstrongs are found within the same general area, where the three counties nearly converge and were once part of a single county, a much larger Lawrence. They’re listed in North Union Township (now in Sharp County). Stated as Union, Lawrence County in 1850, and North, Lawrence, in 1860. Currently, it appears to be the same place (North Union)

To add to it we have record of his Mother and Father marrying on June 5th, 1842. Again, in Lawrence county. As well as his Father’s land patent signed September 1, 1857, although this takes place in Batesville, Independence County. This Land patient and the census records give circumstantial evidence to the Armstrong lead being the right track and credence to other events claimed in Milton’s life, of which will not be discussed at this time.

I will give another example of contradiction. We have one of the few primary sources (James McIntire) putting Milton with the Texas Rangers. McIntire regales us with a story about Milton when they served in Company B of the Frontier Battalion. Our source names Milton by his last name but incorrectly calls him Yarborough.

“Yarborough was afterward appointed marshal of Albuquerque, New Mexico; but he was too handy with his six-shooter, and, after killing two men, was hanged.”

Jim McIntire’s book, originally published in 1902, in which he mentions Milton Yarberry (as Yarborough) and their time in the Texas Rangers

McIntire’s recollections is nearly spot on with the exception of the wrong rank given to a man, Captain Hamilton, who was actually a Lieutenant; 1st or 2nd depending on the date of the event. Much of his story pans outs, save for the name of Yarberry or Yarborough appearing in the Ranger’s records during this time and place. My cursory glance from here in Albuquerque has not turned those names up. However, I have yet to do my Texas research trip in which I plan to go through the Texas Rangers’ records at their archives and museum in Waco. Hopefully I will uncover some great stuff!

Milton, however, never mentions serving in the Texas Rangers. He does claim to have been in Decatur, Texas, stating:

“[I] Lived ten years in Decatur, Texas where I was in the saloon business with Tony Preston. I owned town property in the place and was respected and well liked. From Texas I went to Canyon [sic] City, Col, where Tony Preston and myself ran a saloon.”

This statement is in direct opposition to several reports on him and his time in Texas. Most reports have him in Decatur for only a brief period of time, and that he was going by the name John Johnson. The most oft told story is that a bounty hunter arrived in town looking for him (as Armstrong or Milton Yarberry?). Johnson (Milton) quickly sells his shares in the saloon and disappears, the body of the alleged bounty hunter found days later filled with bullet holes.

The Dallas Herald on Wednesday February 14, 1883 in a piece about Milton’s execution confirms the Decatur connection but adds much more to the story when it states:

“[Milton]…was at one time a resident of this city, and kept bar for Patty King, whose saloon was in the building at the southeast corner of Elm and Jefferson streets, at present occupied by Messrs. Wordan & Smith as a blacksmith shop. He afterwards went to Decatur, the capital of Wise county, where he embarked in the saloon business.”

Here we now have him supposedly living in Dallas (with new associates for me to investigate!) and the all too familiar saloon connection which repeats in his life from this point on.

How do historians reconcile such things? I’m not entirely sure. This is where I perhaps fail due to my lack of training not to mention education. This is a question I posed to historian Paul Andrew Hutton through the magic of social media.

“Its always tough with conflicting accounts. You as the author have to judge their validity based on when recorded and for what reason and by whom. You know the story best.”

Nearly laconic in response. I understand his meaning, but these things still drive me mad. These are but a taste of the contradictions. One thing is for sure, I am not the only historian to nearly pull out all his hair or contemplate taking up heavy drinking!

*Not too long after writing this piece, I had been told that a city in Randolph County was once indeed called Walnut Hill. However, I have since then discovered no current town had once went by that name. Instead, there was an actual town of Walnut Hill in Randolph County, but, it was short lived and no longer exists. It would lie in Randolph county today yet is geographically close to where we find the Armstrong family in the census records in the current Sharp County.