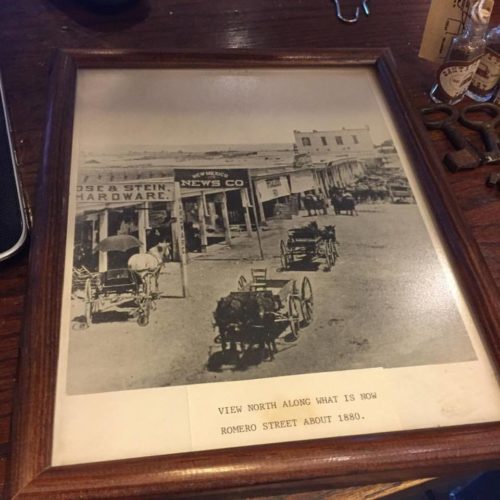 Tier Gifts, Getting Educated, and An Australian Invasion

Last Thursday I was in Old Town (surprise surprise). After several attempts this last month I was finally there while Old Things was open! It is a quaint little shop, with, well, old things. It is associated by family with Treasure House Books & Gifts and lies on the South side off the Plaza on Old Town Rd NW. Basically along the parking lot.

It is not overburdened with items, but, since the place is small it looks to have much more than it does. What it does have, however, can be wonderful to some folks. I personally found a print for my collection of Old Town that I have wanted, plus I found a few tier rewards. These rewards are a few 18th century keys and several little bottles of official Santa Fe Trail Dust. Yes, stuff like that sells. The equivalent for my friends back home in Cascadia (Washington and Oregon mostly), it would be like the Mount St. Helens ash that we all collected in of jars and baggies as children. Now, many tourists love to buy that ash in small quantities, do they not? 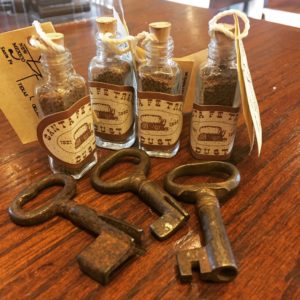 These gifts I found are limited and are attached to the $10 pledge while the replica whorehouse tokens are now at the $5 level.

A few weeks earlier I had told my friend, Bryan, a story about a day in Old Town last Spring. I had been going over sites and trying to picture th old cemetery and what things looked like before several other changes were made in circa 1870-’90.

There were many tourists that day and one big tour bus that had a good amount of these people coming and going from. Several had been staring at me for quite sometime. I was wearing jeans, boots, green t-shirt, my (awesome) gambler hat, and of course my Ruger (old west style) revolver. One particular lady that had kept watching me finally asked quite seriously “Excuse, Sir? Are you the sheriff?” I gently laughed and told her that “No, Ma’am. I’m not.”

Bryan suddenly looked at me with a look of disgust, as though saying, “You idiot! Don’t you see it?”. He then suggested I dress the part, hang out in Old Town, talk to the tourists (and locals) who stop me. Tell them about my books, website, and Patreon site. Get people interested and hand out pamphlets about what I’m doing. Plus, if they want to take pictures I should ask for donations.

I felt rather stupid for not thinking of it before. I have plans for doing historical tours in the future and a few other things and this fits in perfectly with all of those. While I am working on the crowdsourcing, local researching, and a little writing, I can actually get some funds raised while talking about history, and yes, even narcissistically about myself.

On my way back to Zoe I stopped and asked a gentleman who was sitting at a table on the Plaza what he was doing. Turns out he works for the City and sets up the (mostly) Native vendors on the East portal, as well as other things. We discussed what I was wanting to do and he gave me much of the info I needed.

It turns out Old Town has some serious restrictions of what is allowed to happen, especially on the Plaza Park, including the portals surrounding the Plaza on Romero, San Felipe, North, and South Streets. I understand this perfectly. It is a historical site that tries to keep things in order.

After ending my educational conversation with him I took no more than ten steps when I was stopped by a wonderful Australian family. As we know I am terrible with names and it usually takes me sever times to remember them. I completely blank on her name, so please forgive me if you see this. Her husband’s name I believe was Toby. Again, I apologize if I am misremembering. I never did catch the kid’s names nor that of whom I assume was their Grandmother.

They stopped me with the typical question I get from tourists in Old Town (well, about six times). It had to do with Clarice which was at my hip as per usual. We talked of guns and the laws not only locally but in Australia too. While I am a gun owner and an advocate of (and prefer) open carry, I do believe there is a sick gun culture here in the U.S. and am willing to see a few changes made. However, I have learned and now believe the Australian laws as I have been, admittedly barely educated on, are far too invasive and strict. But that is enough of that subject!

It turns out my new Aussie friends are history nerds (which is awesome!) and I told them about Milton and the biography I am writing about him. We also discussed myself and the other book I am writing in conjunction with the Yarberry bio. I gave them my card and the info on my website and of course the Patreon page.

I enjoyed talking with them a great deal and they seemed genuinely interested in my projects. They told me they would check out my sites, and I hope they do. Whether they become patrons of mine or they tell others about me, my projects, and sites, I will be immensely thankful.

I can’t tell you how much I enjoy meeting people from not only other parts of the country, but especially from other parts of the world. I look forward to meeting many more in the next few months once I get started on this whole busking thing. These are things I could not have even considered only a couple of years ago.

Well, enough for now. I am actually headed back tomorrow. There is a another print I need to pick up now that I have learned more about it this last week.

As always, thanks for your time