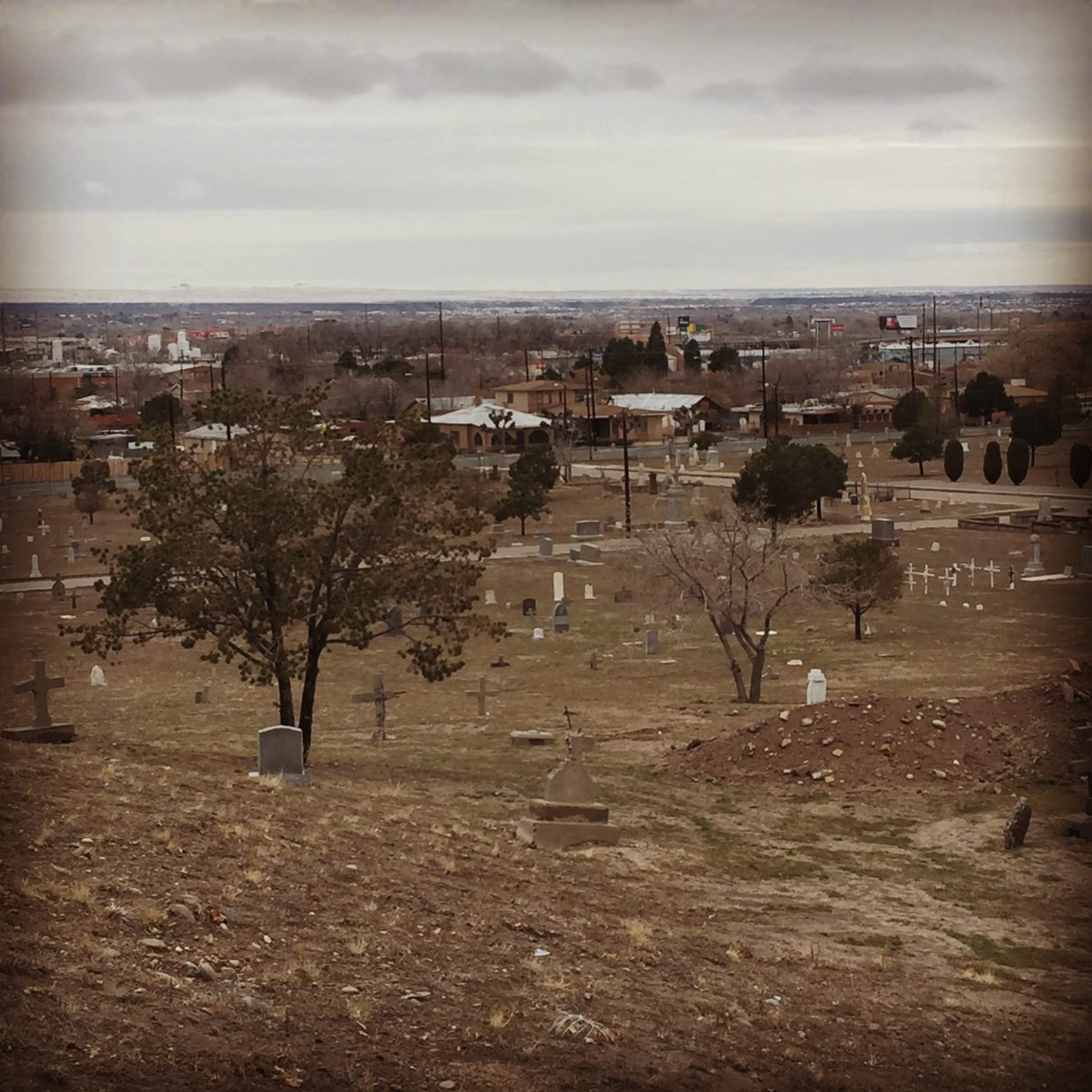 A Day in Old Town and the Santa Barbara Cemetery

Somewhere in that dilapidated cemetery lies the remains of Milton Yarberry. His headstone, removed for unknown reasons in the mid twentieth century, was last seen and documented in the 1960’s. You’ve seen it before, contained in the first post I made on here in a photograph taken by Andy Gregg.

But first let me start with the begining part of my research day.

Today I made the short trip though Albuquerque and spent some time in Old Town. I love this place, especially on the plaza.

Upon arrival I took off Clarice and locked her up. My first stop being the grounds and office of the San Felipe di Neri Parrish and then their shop and Museum, I didn’t want to risk any bad juju by walking into the 223 year old church with my gun on my hip. Besides, I hear Jesus’ dad used to have an extremely bad temper.

The reason for my visiting the Parrish was to see if they had an archives on the premises. I am searching for names and dates of priests and others from the church dating to 1883 as well as an alleged diary by the priest who baptized Milton and took his body to be laid to rest. It turns out they do have an archive but it only contains things from at the earliest to about 1910. While I would love to just go through what ever they had simply because I am a history nerd, I decided not to ask permission to see those archive today.

I walked over to their museum and gift shop which is tiny but interestingly lies on what was once part of the cemetery, the graves having been moved to the Santa Barbara Cemetery circa 1869. We chatted for a bit but they too didn’t have anything that I could find to help me in any way with my research. They did have some wonderful photos I would like prints of but they don’t have permission to do that. They are actually owned by the Albuquerque History Museum -of which I already need to call the photo archivist in the near future-

Once leaving the sacred grounds I walked back to Zoe so I could retrieve Clarice and put her back on my hip where she belongs. Then, moseying across and taking in the empty Plaza, visualizing the history, I entered one of my favorite places, Treasure House Books & Gifts. This is a quaint narrow book store with predominantly nothing but books about Albuquerque and New Mexico.

I was looking for a book entitled The Myth of the Hanging Tree. It is written by Robert J. Tórrez, former New Mexico State Historian. about the legal hangings in the Territory -including Milton’s- in part dispelling the myths of them. Sadly they did not have it, but it’s okay because I don’t actually need it at this time.

I talked with John’s* wife – of which her name escapes me- about books and history. She and another lady asked about and listen to what I am working on. They expressed genuine interest! After purchasing a book that has nothing to do with my work -something I am trying not to do- I made my way out and took in the beauty of the Plaza and that particular part of Old Town. 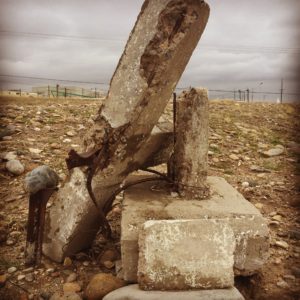 A once proud monument to a now unknown person lies broken and twisted, its iron rods now exposed and corroding in the open air.

Milton was running through my head as I made my way around. This is nothing unusual but today I was thinking of his death. How he was killed. The people involved. The witnesses. His executioner. And his friends who were there. Then my mind tuned to his final resting place. That, is how I ended up at the Santa Barbara Cemetery a quarter of an hour later.

I walked for quite some time through the cemetery. This was not my first time there and it will not be my last. I wandered, wondering if I had passed over the spot where he lies, the rope around his neck long since disintegrated. 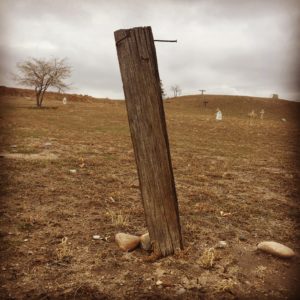 A lone wooden post, perhaps once part of a cross, now adorned only with a few rusty nails protruding from it. Who lies here and from when? No one will ever know.

So many graves, such as Milton’s, are now unmarked and lost. Decedents of theirs will never be able to to see the actual spot where perhaps their great great Grandfather or Grandmother are resting. I went to the monument of Perfecto Armijo’s resting place. One of Milton’s friends, and the reason he had obtained the job as Marshal of New Albuquerque in 1881. He had spoken of Milton’s innocence for many years after his death. Armijo is a fascinating man and character of Albuquerque history and I will be covering him in Milton’s biography. 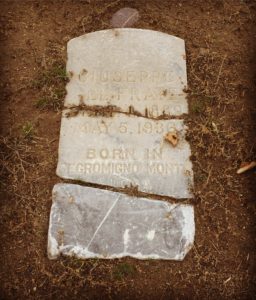 No longer erect, this monument to a Giuseppe Del Frate now broken and on its back, is slowly being taken over by the desert.

I found myself becoming irritated and angry with the state of the cemetery. It has been neglected or given only minimal care for probably decades while the newer Mount Calvary cemetery -of which it is now part of- is lush and well manicured. The only attention they give it it seems is when they put all the displaced dirt and rocks from the Mount Calvary sections on the top of its little Boot Hill. 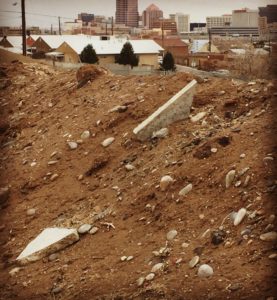 The barrier of dirt on top of the hill in the Southwest section. It is filled with bricks, rocks, wood, and pieces of broken head stones. And who knows what else?

I walked along this dirt barrier, looking at its contents. Bricks, small chunks of concrete, rocks, and pieces of headstones all poking out of this long, consecrated dirt refuse mound. I am not sure, but I believe I may even have found a small piece of bone. I did a questionable thing by taking this piece with me. If it is bone, and it is not animal in nature, but human. I believe there should be some Hell to pay in the treatment of this site and souls of which should be resting, not plowed over and forgotten.

I do not know when, how, or even if I will be able take it in somewhere to get tested. I’m not sure if it is even enough to be identified if indeed it is bone.

Well, that was my day. I spent the rest typing this with my two middle fingers, because that’s how I roll..er..type.

Thanks once again for you time. If you are not a patron of mine, I kindly ask you to consider becoming one. It will help me complete my work on these two books as well as other projects in the future. If you know of someone who may be interested in what I am doing, please pass this on to them or tell them about my Patreon page.

*John is the Owner of Treasure House