The 950-Year-Old Battle That Changed the Way You Talk

OCTOBER 14, 2016 By Christopher Klein for History.com

William the Conqueror’s victory at the Battle of Hastings on October 14, 1066, marked the demise of the Anglo-Saxons and led to his installation as the first Norman king. Find out how one of history’s most famous battles altered the course of England—and the world—and forever changed the way that English was spoken.

The year dawned with England’s childless king, Edward the Confessor, near death, and multiple claimants from across Europe vying to succeed him on the throne. It was thought that Edward, whose mother was from Normandy, had years earlier promised the throne to his first cousin once removed, William, the Duke of Normandy. If so, the king apparently had a deathbed conversion and instead deemed his brother-in-law Harold Godwinson, the Earl of Wessex, to be his successor before he drew his final breath on January 5, 1066. 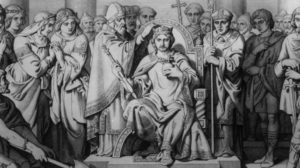 The following day, Godwinson was crowned King Harold II at Westminster Abbey, maintaining the line of Anglo-Saxon kings who had ruled England for six centuries since the end of the Roman Empire. The coronation set off a fierce succession crisis. Edward’s great-nephew had a claim to the throne but was barely a teenager. Norway’s King Harald Hadrada cast a covetous eye at England and joined forces with Harold’s exiled brother, Tostig, to launch an invasion in September 1066. King Harold’s forces intercepted the attackers and routed them on September 25 in the Battle of Stamford Bridge, a savage fight that left both the Norwegian king and Harold’s rebellious brother dead.

King Harold had mere days to revel in the victory before learning that England was yet again under attack by a claimant to the throne. With England’s southern coast left unprotected, the snubbed William led a Norman-French army of approximately 7,000 troops and cavalry across the English Channel, landing at Pevensey on September 28. Harold II led his forces south to London, stopping for rest and reinforcements, before continuing the 250-mile march to meet the latest enemy. 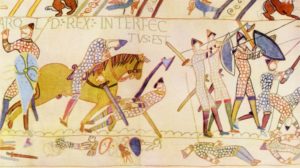 The death of Harold at the Battle of Hastings, as depicted on the Bayeux Tapestry. (Credit: Culture Club/Getty Images)

The two evenly matched armies clashed seven miles northwest of the village of Hastings on October 14, 1066, in a ferocious fight that raged the entire day. Harold deployed his forces in a defensive position along a ridge and ordered his men to stand side-by-side and form a “shield wall,” which failed to give way under repeated calvary assaults and a shower of arrows launched by Norman archers with powerful crossbows. Only after the Norman invaders pretended to retreat, causing Harold’s army to break rank, were they able to break through the line and destroy the Anglo-Saxon forces. As darkness descended, Harold was among the thousands lying dead on the battlefield, the victim, according to legend, of an arrow that pierced his eye.

Six centuries of Anglo-Saxon rule over England was over. William marched his army along the coast and eventually to London, which fell without any resistance. The Norman Conquest of England was complete when William the Conqueror was crowned the first Norman king of England on Christmas Day inside Westminster Abbey, the coda to a tumultuous year. 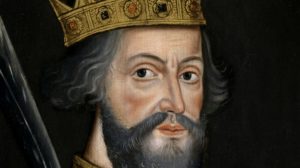 William’s victory at the Battle of Hastings and his ascension to the throne forever changed English—and world—history. Prior to the Norman Conquest, England had been an inward-looking island kingdom more closely linked to Scandinavia than the rest of Europe. Since the Normans retained their stronghold across the channel, English monarchs afterwards had close ties on the continent and a foothold from which to project their power to the rest of Europe. “Without a secure continental base, it is unlikely that any English army would have ever hazarded its chances in France or elsewhere, at least before the beginning of the modern era,” write James Lacey and Williamson Murray in “Moment of Battle: The Twenty Clashes That Changed the World.”

The Norman Conquest would be the last successful invasion of England. For centuries to follow, it would be England that was more apt to be the aggressor as it became more outward-looking and expansionist, a viewpoint that would eventually lead to its colonization of continents around the globe, including North America. “From the time of the Conquest, English armies were far more likely to tread on the Continent than the other way around,” Lacey and Murray write. 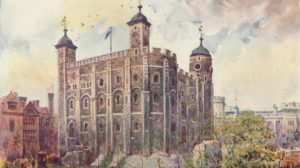 The Tower of London’s White Tower, which was first constructed by William the Conqueror. (Credit: The Print Collector/Getty Images)

Beyond geopolitics, the Norman victory at the Battle of Hastings ushered in a cultural transformation of England, with implications from law to religion, architecture to language. In the months following William the Conqueror’s coronation, the Normans began to build grand castles, which had been previously unknown in England, in order to fortify their new conquest and protect themselves from the periodic uprisings launched by the conquered Anglo-Saxons. Just months after coming to power, the new king began construction of the Tower of London and the original Windsor Castle. Utilizing forced English labor, Norman barons built enormous fortresses surrounded by walls and moats that dwarfed previous Anglo-Saxon manor houses. More than 80 such castles dotted the English countryside by the end of William the Conqueror’s rule in 1087. After the Normans took control of church leadership in England, they also initiated a surge in the construction of monasteries, churches and soaring cathedrals such as those in Canterbury, Winchester and Durham. 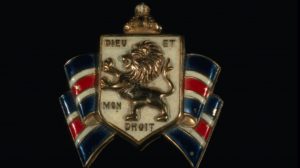 In addition to being seen, the impact of the Battle of Hastings can still be heard today in the words of hundreds of millions of English speakers. Following the Norman Conquest, French became the language of government and business. (The motto of the British monarchy emblazoned on the royal crest is still the French phrase “Dieu et mon droit,” meaning “God and my right.” William the Conqueror spoke no English and would never master it during his 21-year reign, which was just as well since the new rulers looked down upon English as the language of the commoners.

The Old English spoken by the Anglo-Saxons closely resembled the German language. The Normans blended French and Old English to begin the transformation of the language into modern English. The French-speaking Normans injected new words into Anglo-Saxon English that are still in use today—such as attorney, beef, button, castle, chimney, duke, flowers, jury, justice, language, marriage, royal, soldier and tailor. 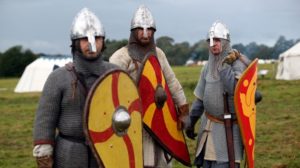 French names such as Henry and Richard were also introduced into England, but few names became as popular as that of the first Norman king. By the 13th century, William—an Old French name composed of Germanic elements (“wil,” meaning desire, and “helm,” meaning protection) was the most common given name by a wide margin among English men, according to an important medieval record known as the Henry III Fine Rolls. Even today, it is still in the top 10 boys’ names in the United Kingdom and could be the name of an English monarch for the fifth time if Prince William ever ascends to the throne.