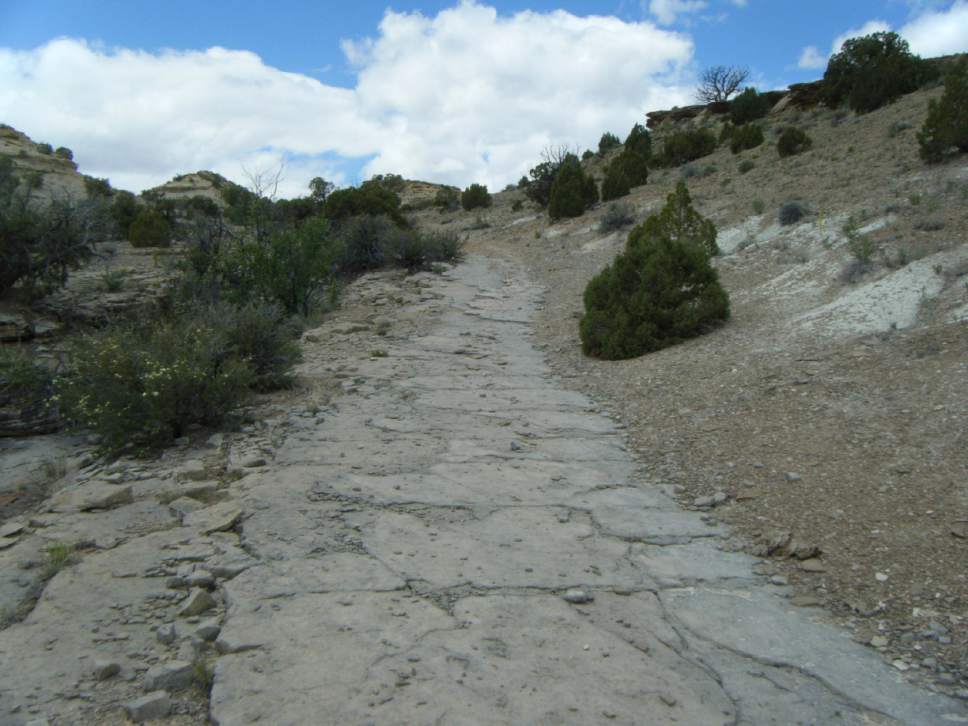 History » Before the Southwest was U.S. territory, the trail was a vital link between Santa Fe, L.A.

For two decades before Mormon pioneers arrived in lands that would become Utah, European traders and migrants traveled across what was then Mexican territory on trails connecting the Spanish settlements of Santa Fe and Los Angeles.

This trade left an indelible mark on the history of the American Southwest, prompting Congress to designate the Old Spanish National Historic Trail in 2002. The designation did not pinpoint the trail’s exact location, but rather outlined the general alignments of its three main branches.

Now, the National Park Service and the Bureau of Land Management are developing strategic plans for administering the 2,800-mile network, with the goal of better identifying, interpreting, and preserving the trail that crosses southern Utah and five other states along multiple routes.

The federal agencies’ management plan is out for public comment through Oct. 17.

“This document identifies the trail as best as possible, and the areas where the values and qualities and recreational opportunities are the most viable, still intact and worthy of attention,” said Rob Sweeten, the BLM’s historic trail coordinator.

In most places, the route is barely discernible on the ground, nor is it even precisely known, according to Sweeten, who’s based in Salt Lake City.

“It crosses a broad variety of ecosystems and terrain, but it’s not a rich trail for traces. The pack mules didn’t exactly leave a deep footprint,” Sweeten said.

The Old Spanish is the fourth congressionally designated historic trail crossing Utah, underscoring the territory’s central role in the West’s pioneer history. The others routes are the Mormon, California and Pony Express trails. In all, Congress has designated 19 historic trails.

“Most national historic trail routes are initially mapped at a very coarse scale, and their specific historic location is often not known. The accurate identification of many of these routes will require intensive research and ground-truthing, expensive and time-consuming tasks that will be ongoing throughout the life of this strategy,” states the draft document for the Old Spanish trail.

The draft plan identifies 21 “high-potential sites” in Utah — including ruts in the San Rafael Swell, the Green River crossing, Looking Glass Rock, Mountain Meadows and the “Paso pro agua 1776” inscription in Kane County — that could make worthwhile waypoints to develop for public interpretation and recreational use.

“We hope this strategy has refined the line that was drawn on the map in 2002. That was rough in nature,” said John Hiscock, manager of the Old Spanish Trail Association. “We want to get the trail signed as well as possible for public knowledge. We want to develop educational and interpretive programs. We want to do the most to encourage the land agencies to develop recreational opportunities along the routes, retracement of trail, recreational trails that people can hike to relive the historic experience. We would seek the values connected with the trail protected, on federal land especially.”

In Utah, two-thirds of the trail mileage crosses public lands.

The 1,100-mile journey from Santa Fe to Los Angeles took three months. At the time, there were no settlements between the western terminus at Mission San Gabriel in what’s now California, and Abiquiu, a town near Santa Fe. Historians have few first-hand accounts of these voyages since most traders didn’t write about their experiences on the trail, unlike Anglo pioneers who a generation later left a rich record of their transcontinental crossings in diaries and correspondence.

In 1829, hardly a decade after Mexico gained its independence from Spain, Antonio Armijo made the first crossing from Abiquiu to Los Angeles, along a southern route that now bears his name. He brought 60 men and 100 mules — wagons were no good in this terrain. Packers were jacks-of-trades, possessing proficiency in disparate trades that included knot-tying and rigging, navigation, smithing and veterinary medicine. The Armijo route tracks along what became the Utah-Arizona state line, entering Utah near present-day Page, Ariz., meeting the Colorado River at the Crossing of the Fathers, now under Lake Powell.

Two years later, William Wolfskill and George Yount blazed the easier Northern Route, entering Utah near Dove Creek, Colo. It passed through Moab and Green River and then crossed the San Rafael Swell to Salina, where it turned south and went up the Sevier River. North of Panguitch, the route left the Sevier and climbed over the Tushar Mountains and passed through Enoch and Mountain Meadows, which later became famous as the site of a pioneer massacre at the hands of Mormon settlers. The trail exited Utah near Mesquite, Nev.

Use of the trail tapered off after the territory was ceded to the United States in 1848 and time has all but erased it in many places.

The legs passing through Utah’s Iron and Emery counties are getting the most attention by historic preservationists. In partnership with the BLM, Iron County plans this fall to install 85 signs along the 86 miles the Northern Route crosses Iron County, from the eastern end of State Route 20 near the Sevier, over the highlands along Bear Valley and Little Creek Canyon Roads to Paragonah and into the West Desert. The town of Enoch is developing a museum.

Each town has its own plans, including trail markers and interpretive facilities, said Dave Jacobson, a recreation planner with the BLM.

“We hope to make better parking access,” he said. “There are places to hike trail traces west of Cedar City, where the ground was compacted by walking mules.”

Emery County commissioned Eldon Holmes, an artist based in Cleveland, Utah, to create public sculptures to commemorate the trail. From 3/16-inch steel plates, he cut silhouettes of mounted figures and pack mules, using negative space to show manes, bridles and saddle blankets. He installed his six figures at the Buckhorn Wash visitor center in the San Rafael Swell. They were vandalized, but he made a new set, using stronger metal supports and larger figures. He also repaired the original set and it has since been installed on a rise at the eastern approach to Green River.